It’s very hot here in Milano. We’ve been so lucky this summer to have experienced cool sunny weather for most of our trip until we reached Milano. Down by the Duomo is a funny sight. Attached to real palm trees are cold water misters. You would think people would gravitate to them, but they don’t seem to even have noticed them.

The church bells were tolling when we arrived at Sant’ Ambrogio. The original church dates back to the 4th century. Above the altar are precious mosaics in gold, but sadly they are not original. This church suffered damage during WWII. A 12th century canopy from it were fortunately taken to the Vatican for safe keeping during the war.  This church is very old. The wooden doors had iron bolts in them. The pulpit dates back to the 12th century and a Christian sarcophagus under it dates to the 4th century. 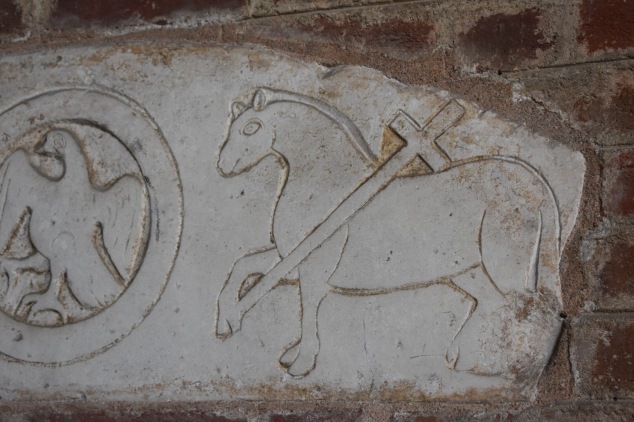 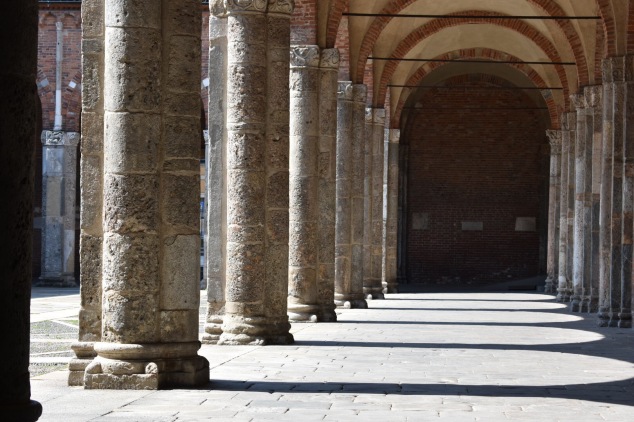 To many pilgrims, this is a very spiritual place. The remains of St. Ambrose dressed in elegant robes lie in a beautiful glass case. A woman who felt very close to this saint, wiped her eyes as she sat before him. 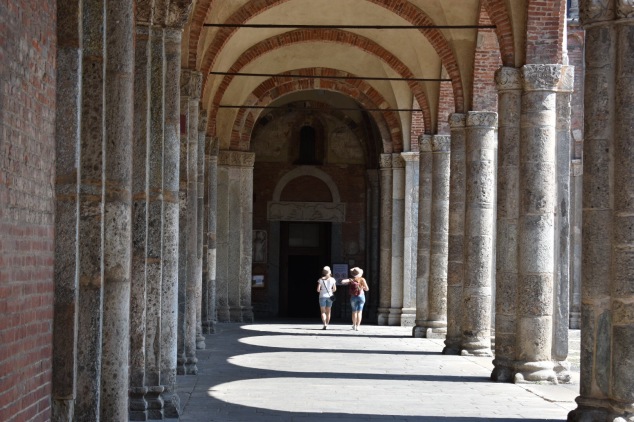 Down the street is San Mauizio, a 15th century church. It was once attached to the most important convent of the Benedictines in Milan. It was sweltering hot inside, but it was covered almost entirely with frescos in brilliant colors which helped us forget about the heat. My favorite were three paintings showing the story of Noah’s Arc. The artist painted beautiful animals such as elephants, dogs, and birds boarding the arc. There was also a precious painting of The Annunciation. As we left, a man working for the church stopped us and spoke about how he was touched by David’s enthusiasm taking photos. “I feel happy you are happy,” he said. 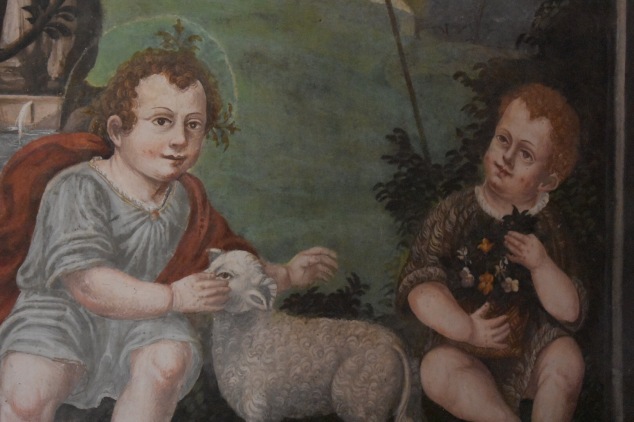 The highlight of the day was viewing Leonardo da Vinci’s The Last Supper. We booked our tickets two months in advance which was lucky because the sign said there are no more tickets available until September. I always thought the painting was in a church but it is beside the church in the refectory of the Convent of Santa Maria Della Grazie. 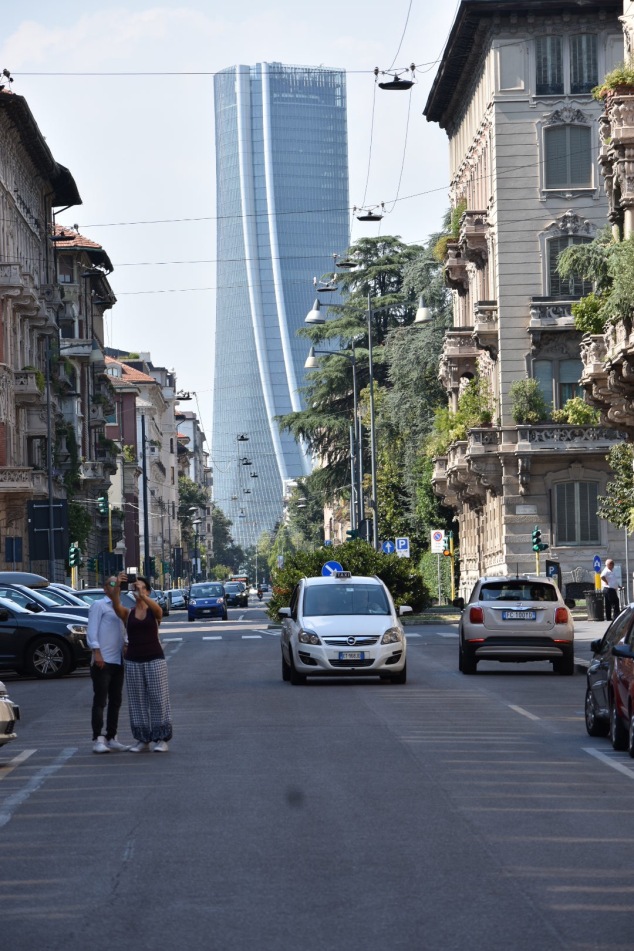 Leonardo was hired to paint the picture there which took him 6 years. He painted directly on the wall in layers. During WWII, the church was damaged but miraculously the painting survived. The last restoration in 1991 peeled away 500 years of restoration and took it back to the original painting. 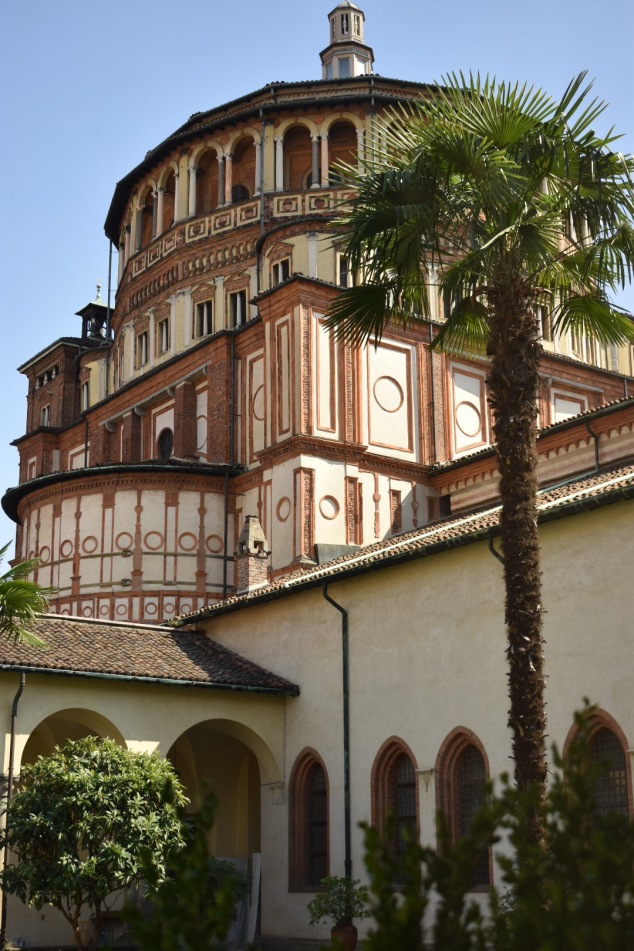 Only 30 people at a time may view the painting for 15 minutes. Our guide created quite a dramatic entrance. We went through three air conditioned rooms where doors closed behind us and then suddenly the doors opened to the refectory where there it was in all its glory, The Last Supper. As I entered the room, everyone was standing in awe with cameras held high. Our guide let everyone savor this moment before telling the story of the painting. I was very moved by the whole experience. 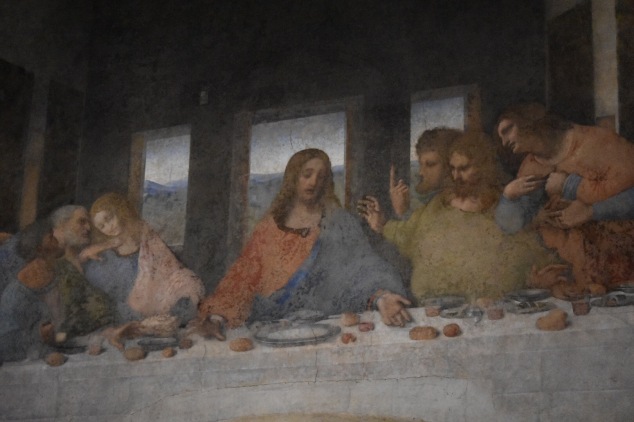 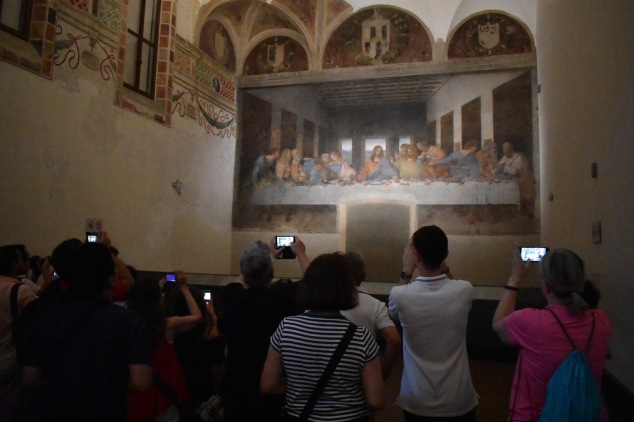 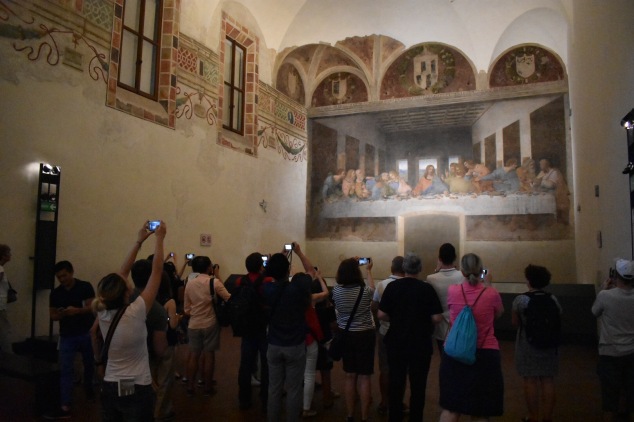 Tonight we went to Naviglio Grande which is a canal here in Milan. In recent years this area has become revitalized and is very popular with tourists. On either side of the canal are outside cafes where tonight it seemed everyone had come to enjoy them.

We had dinner at a pizzeria and dined on pizza with Parma ham and mushrooms. Beside us a couple ordered a seafood pizza. It had clams in their shells on top of it along with some sort of large prawn in its shell. I thought it was quite unusual.

During our meal a man appeared lit up with tiny lights. He tried to entice us with giant sunglasses with lights in them, cigarettes which said “smoking kills,” and a fan that said I Love Italy when he turned it on. Unfortunately he saw me looking at some cute animal keychains. They lit up and made animal sounds. For some reason I got talked into buying a cute donkey for 3 euro. “You may have 2 for 5 euro,” he said making a cute rooster crow. I offered him 4 euro and the deal was closed. “Enjoy your pets,” said the Canadians beside us. We all had a good laugh.

Walking back to the hotel we passed the Duomo all lit up. Crowds gathered to cheer on a violinist and dancers. It was amusing to watch  because I suspected the violin music was actually prerecorded and he was only pretending to play,  It was hard to leave the ambience of this amazing place and come back to the hotel. Tomorrow we fly home. 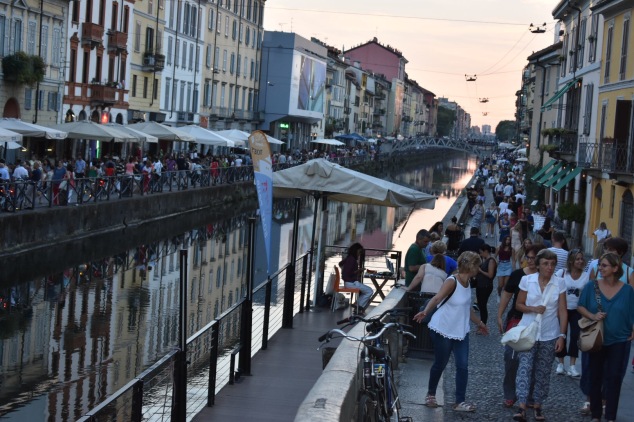