It was a warm sunny day this morning and the little boutiques in Bellagio were so busy I had to wait in line just to see some reproductions of old posters of Lake Como. Down at the bank machine an American who had just arrived was quite distressed. “It said the transaction is not valid,” he told me. “It said the same thing at the other bank machine. How were you able to get cash?” he asked. As it turned out, he had never told his bank he was going abroad. For anyone traveling this is something you must do, we have learned from personal experience, or the bank will view your card as stolen.

We decided to visit Lake Lugano in Switzerland. To get there we took a ferry across Lake Como and a one hour bus ride to Lugano. The views from the bus were breathtaking. As he wove up and down steep hills on narrow roads, we could see the lakes below. Parts of the road were so narrow winding through tunnels our driver had to honk his horn as he approached every bend.

When we arrived at the Swiss border, border patrol officers came aboard, looked at everyone, and waved us on through.

Lake Lugano is very pretty. Surrounding the city are tall rugged mountain peaks accessed by gondolas or funiculars. At the water’s edge, people were renting the cutest retro 1950s paddle boats.  I was very surprised to learn this is an affluent town. All along the shaded shopping promenades were stores such as Gucci, Rolex, Prada, Cartier, Nespresso, and my favorite, Swatch. The difference between here and Boston is the stores seem a little more welcoming. We passed an old world cafe that looked right out of a movie set. 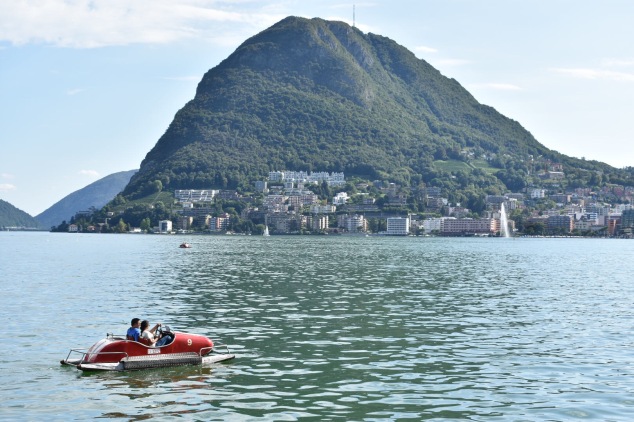 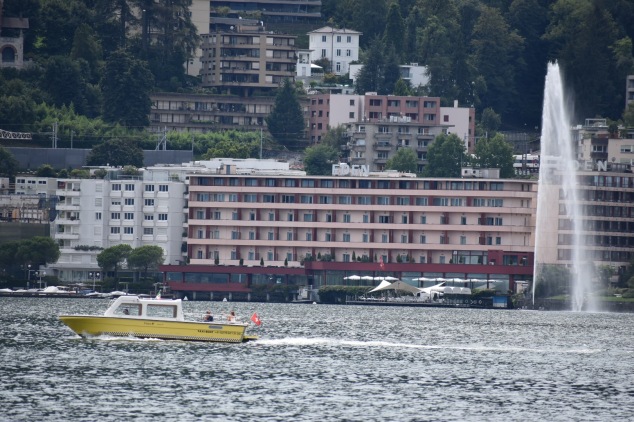 In the main square, two nicely dressed college age students approached us. “Do you speak English,” they asked. “We are in a contest with our scout troop where we have to travel from here to Lucerne. We have no money and we are hungry,” they said giving us a sad look. We didn’t believe them. David was very polite. He told them they looked pretty healthy so he was so sorry, but no. I, on the other hand, called them out on the scam and told them no scout troop would send people begging for money. 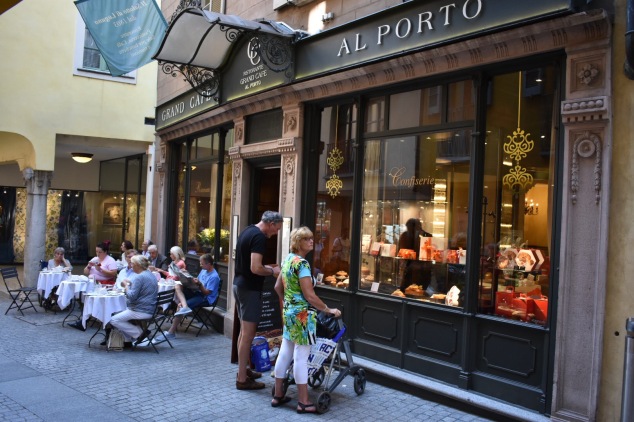 Switzerland is expensive. We followed the advice of our Rick Steves’ guide and ate in a wonderful market style cafe with fruit, cheese, pasta, sandwiches, and hot meals all served buffet style.

The Church of St Mary’s of the Angels looked similar to other churches in the area on the outside, but when we stepped inside, there was an enormous fresco which we learned is the most beautiful one in Switzerland.  It was created by a Milanese artist during the Renaissance and took him a decade to finish it. 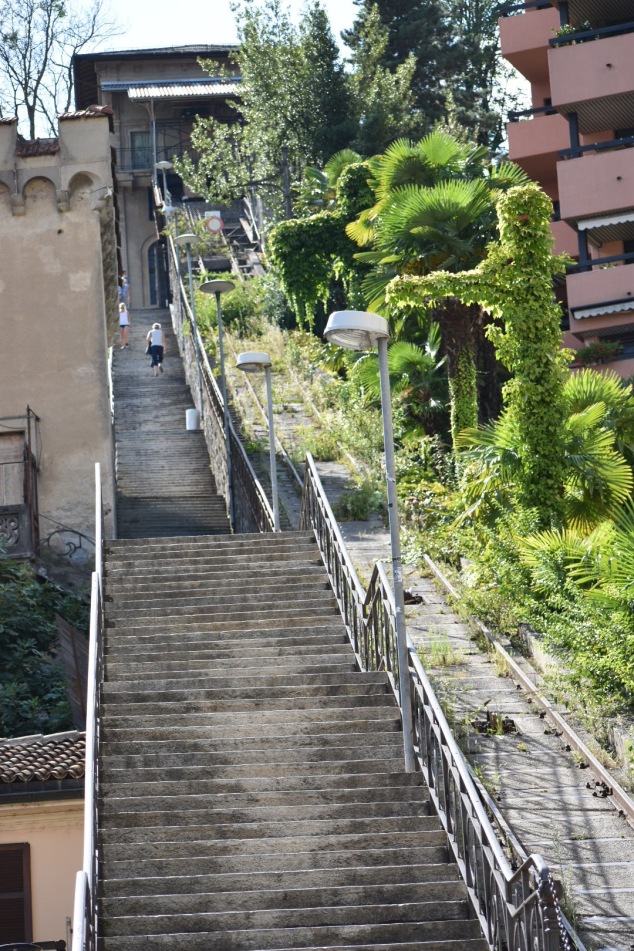 On the way back to Lake Como our bus drove the same narrow winding roads with the horn tooting, but this time I was sitting on the outside toward the cliff. This driver was truly skilled taking one hairpin turn after another. “That was the most hair raising experience of my life. It was really scary,” said one of the passengers to a group of strangers back on the dock.

Dinner tonight was on an outside patio in Bellagio. It is now 11:00 pm and there’s entertainment outside just down the street and a small retro carnival for young children with a train that is shaped like a caterpillar. We will really miss this beautiful place which we both agree is our current favorite place. Tomorrow we head to Milan. 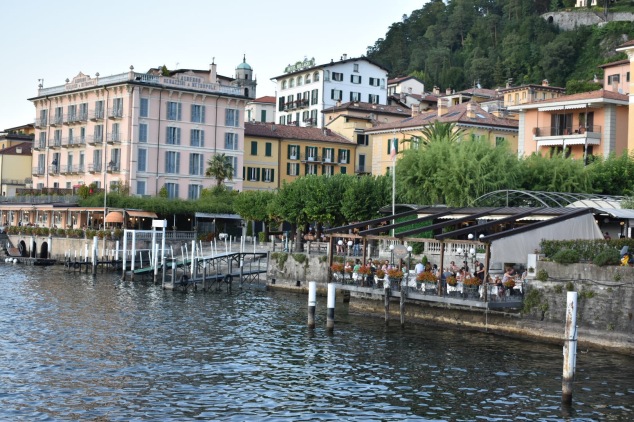 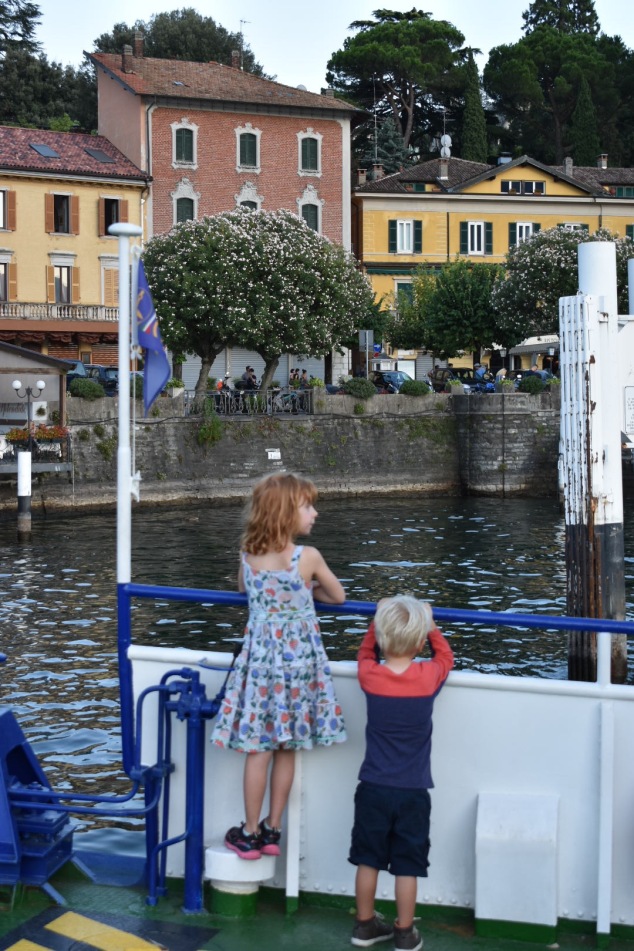 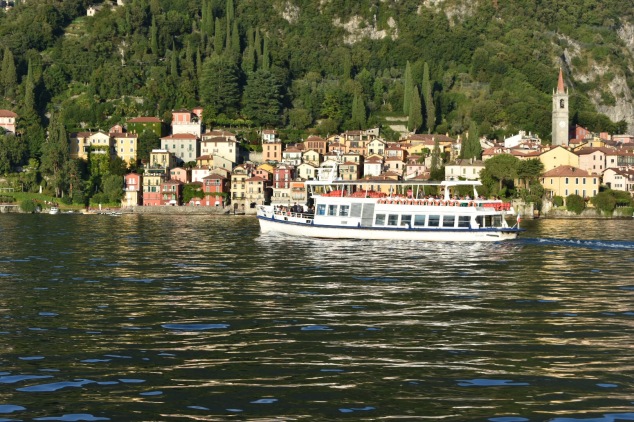