This is a holiday weekend in Parma. Because of it, most shops are closed and many of the museums we had on our itinerary were closed until 1:00 pm, but no problem. We plotted out a new plan and had a great day. 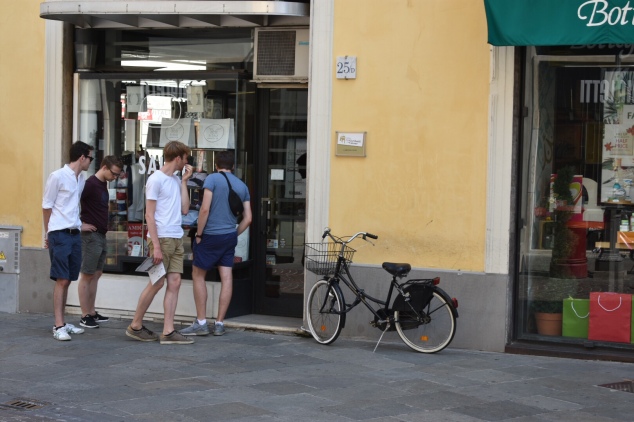 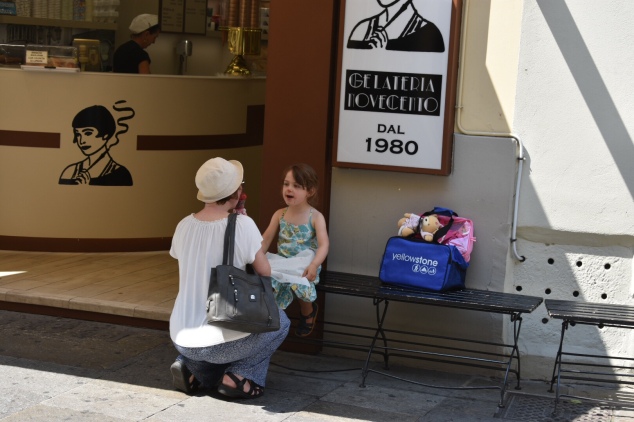 The temperature today was in the mid 90s and it was very humid, but fortunately, most museums have air conditioning to preserve the artwork, and churches tend to be 10 degrees cooler inside. The streets are a different story. What’s surprising is walking past department stores with the doors wide open blasting cold air out the door which feels very inviting as you pass by.

The Museum Diocesano (museum of the church) was designed to preserve many of the original statues from the Baptistry that were crumbling from the elements. The statues of Solomon and the Queen of Sheba were beautifully displayed and if you looked closely, you could see evidence of color or words. Glass floors provided opportunities to see excavations of old Roman ruins. Along several walls, beautiful mosaic tile floors were on display, each one in almost perfect condition. 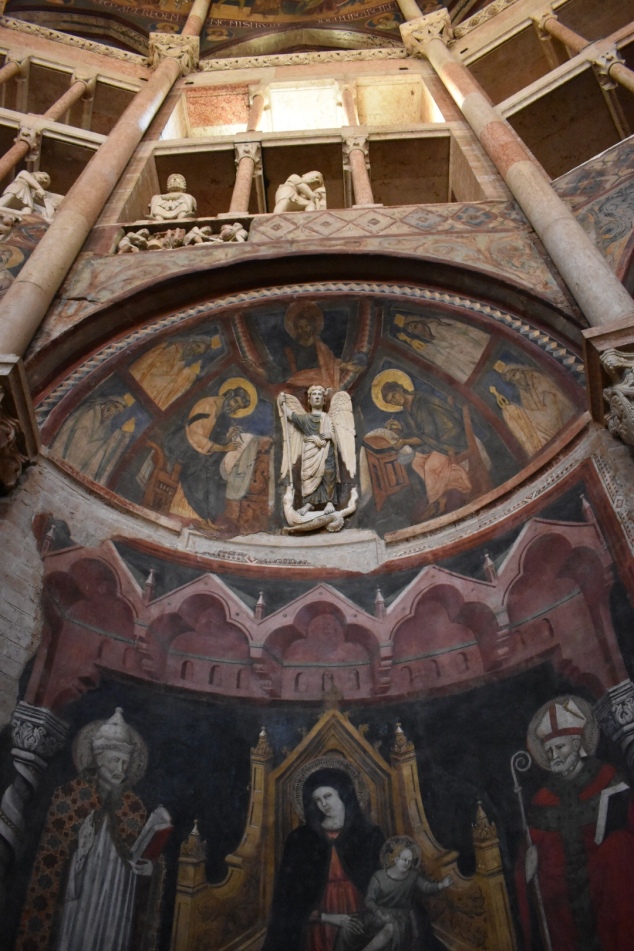 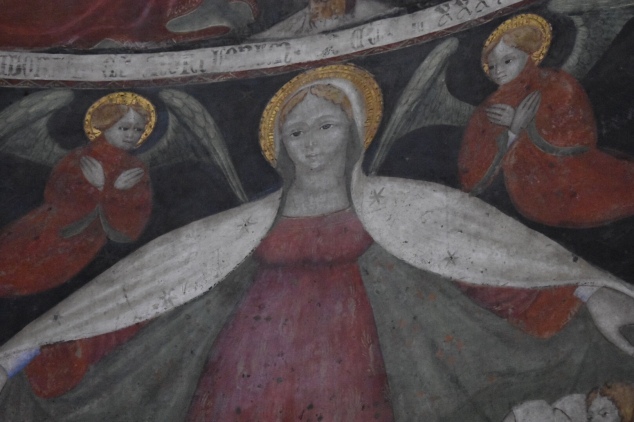 The Baptistry, the place where people were baptized, dates back to 1196. It has 16 arches in the dome all surrounded with paintings telling a biblical story, and the walls are covered with 14th century frescoes. If you look closely, you can see areas of restoration with modern day building materials.

Outside on the steps of the Baptistry we met a family with two elementary age children from Leeds, England. They love to travel, but the children were wilting in the heat. They wondered what was inside the Baptistry and when I described it, they told me I would be really wowed by the Duomo and they were right. It was dark inside but very ornate with a huge pipe organ. In the dome was a painted scene of people floating through clouds to heaven. It looked three dimensional. 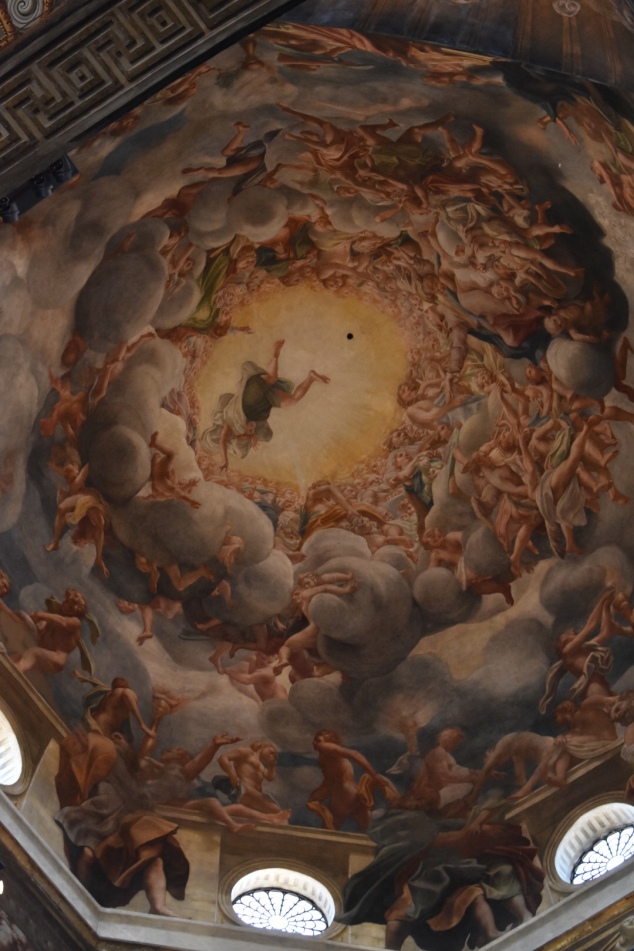 We ate at an old world style restaurant on the piazza. Our starter was Parma ham and melon followed by our meal of spinach, pumpkin, and mushroom tortelli. They handed us a menu with pictures of the most amazing desserts, but we decided to pass even though the waiter looked at me with a grin that said, “You know you want one.”

The builders and visionaries of Santa Maria Della Steccata used St. Peter’s in Rome as a model. It’s a Renaissance church with frescoes from the 16th century. The painted dome looked like carved marble, but everything was painted.

Before we went inside there was a close call in front of the church. A woman parked her bright pink dog stroller outside on the sidewalk, but when she went inside, her adorable little furry dog jumped out of the stroller. He was attached to the stroller with a short leash and tried to pull away so it would have been stroller and all into the street. David held the dog and untangled it from its leash while I dashed inside the church and whispered to several couples asking if they had a dog gesturing outside. “Dog?” People looked at me quizzically. They spoke no English. One woman finally understood, spread the word, and the thankful owner came running outside calling out, “O mio dio!” 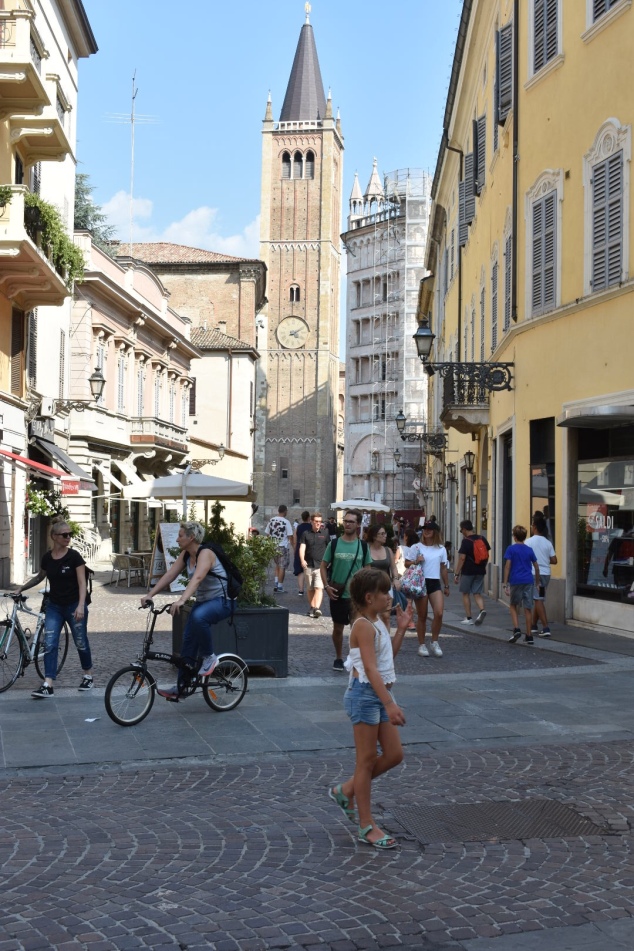 At the Church of San Giovanni Evangelista built between 1490-1519, local artist Correggio painted the dome, People again appeared to be floating through clouds upward to heaven. I spotted a box where for 2 euros, the dome would illuminate for 2 minutes. It was quite a magical moment. People who appeared to be asleep in the pews, snapped to attention and all eyes gazed upward. One man was contorting himself backwards over a pew to get a perfect shot.

The highlight of the day was a visit to Farnese Theater built in the 1600s which one magazine proclaimed is the most breathtaking site in all of Italy. Stepping inside was like stepping into the past. It’s a wooden arena style theater surrounded by wooden arches. Old photographs from the early 1900s showed the theater crowded with people watching concerts. During WWII, the theater was damaged, but restored to its former glory using the same plans and surviving building materials. 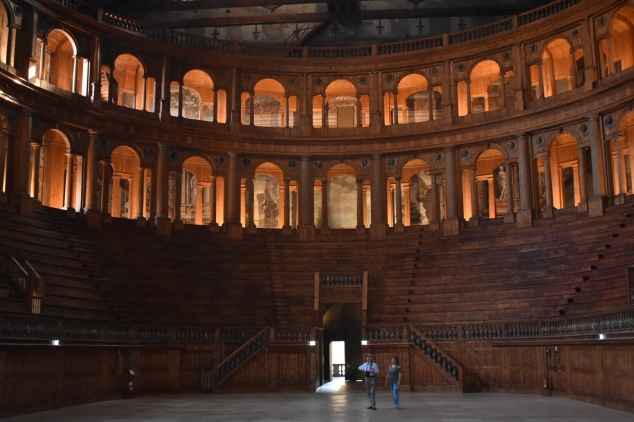 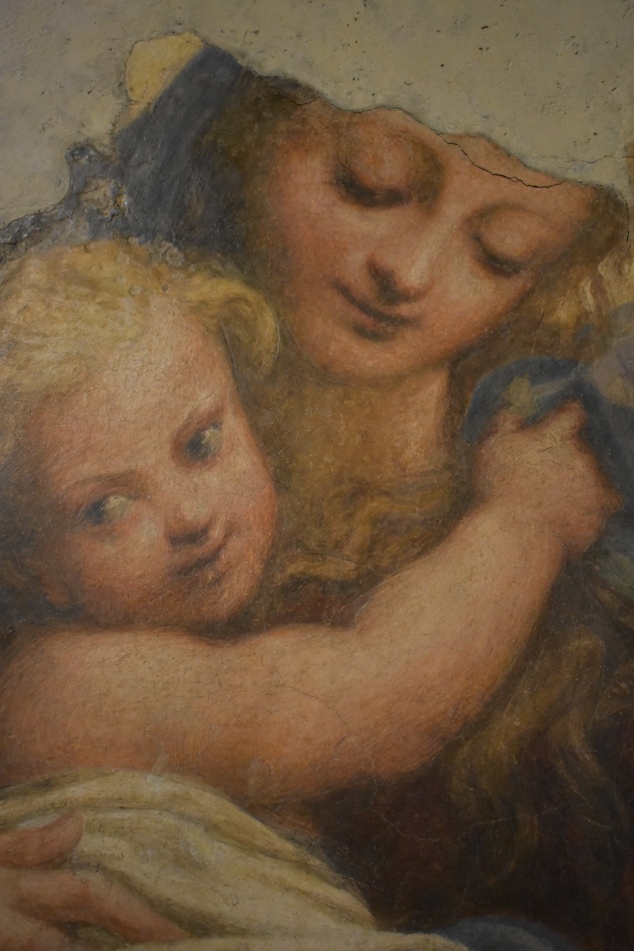 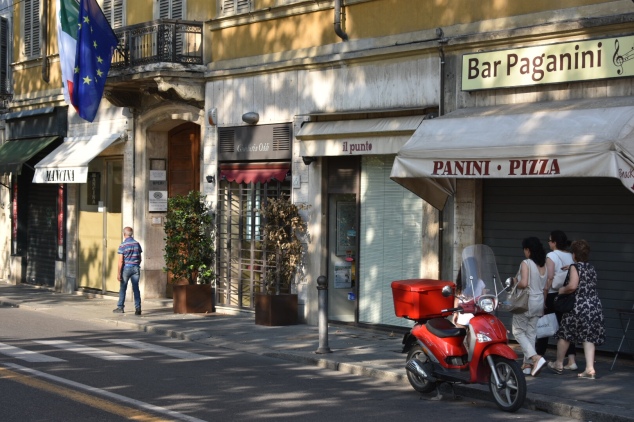 Attached to the museum was the Gallery di Antichita and the Museo Nationale. Tickets include all 3 sights. Our guide said the gallery is sparse and thinking the first room was it, I couldn’t agree more. There was a long table with an odd collection of small bronze statues and an 18th century goblet in a glass case. It turned out that was only the entrance. The museum had many paintings including those by local artists Correggio and Parmigianino. All along the walls in every room were red velvet benches with a note taped on each one “Si prega di non Sedersi.” David and I wondered if it was ok to sit down because si means yes and it didn’t make sense to have 10 of these in every room as some sort of tribute to these benches which truthfully looked rather ordinary, but later I looked it up and sure enough, it means please do not sit down.

Tonight we had a picnic dinner in our room. It’s a good way to save money and as Rick Steves’ says, “It’s good travel.”

3 thoughts on “Stepping Into the Past: Parma, Italy”