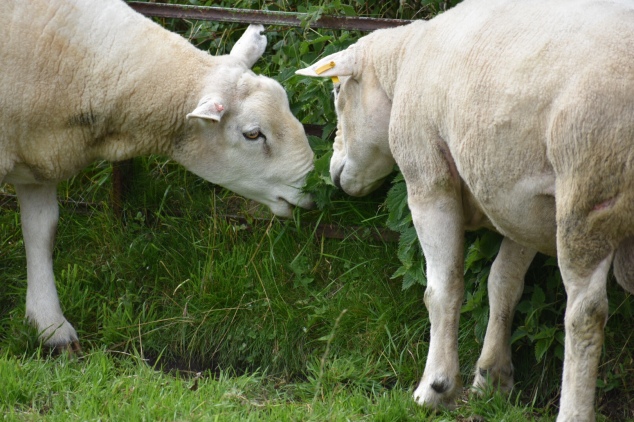 Breakfast this morning was really pleasant in a room overlooking the sea. A full Scottish breakfast consists of eggs, sausage, grilled tomato, mushrooms, and a flat potato scone. We really love the Kilchrenan House. It’s the former retreat of a textile magnate. There are 14 rooms but we think we have one of the best ones with a bay window overlooking the harbor. 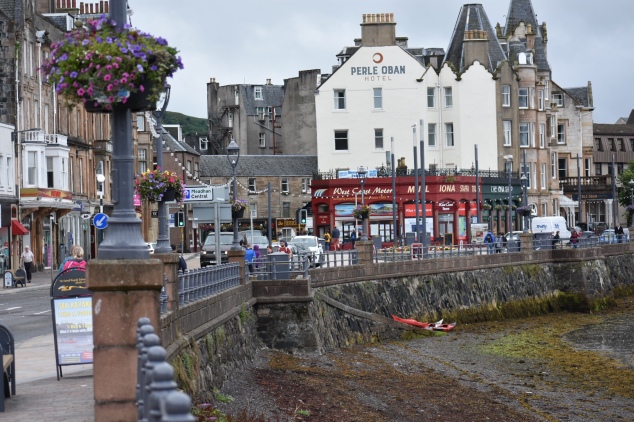 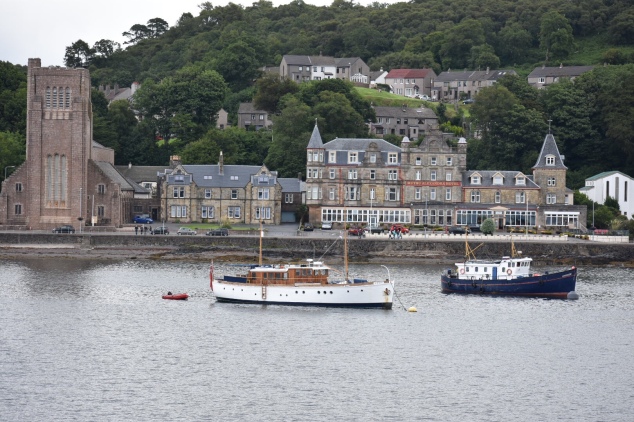 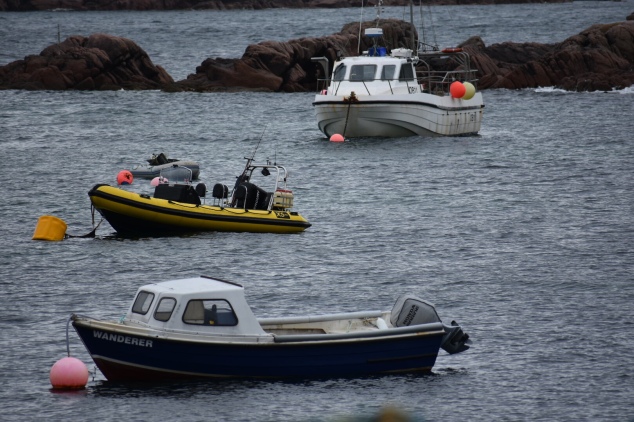 Today was a full touring day to visit the Isles of Mull and Iona. We headed out from our B&B down the winding road to the ferry terminal thankful we had sweaters and jackets. The ferry was massive and big enough to carry cars and 18 wheelers. Passengers eagerly lined up to board, many with backpacks and walking sticks. “Let’s go to Castle Somewhere tomorrow home of Sir What’s His Name,” said a man sporting a blue baseball cap behind me. It was a funny moment because his whole family nodded their heads in agreement. 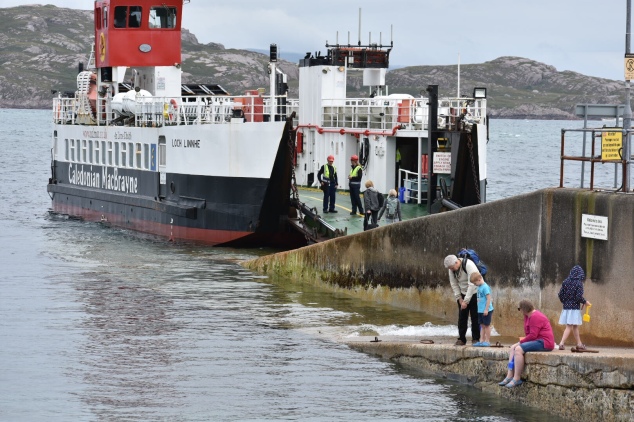 The ferry crossing was only 45 minutes and very smooth. We arrived on the isle of Mull and boarded a coach for a 1.5 hour ride across the island. Chris, our coach driver, gave us a warm welcome and explained that 130/150 miles of road on the island are single track meaning when two cars meet, someone must give way. We drove by a small stone primary school called Lochearhead Primary School where today there is only one student. This is a safe island where people leave their doors unlocked and their mobile phones on their dashboard. Everything looked so green that it was surprising when Chris announced, “This has been such a dry summer a cafe had to close because they ran out of water.” On the other hand, maybe it was a joke. Chris gave a very informative tour of the island sprinkled with numerous jokes such as,”If you liked the tour, mention my name on TripAdvisor, but if you didn’t like it, say Derek was your driver.”

Mull was a desolate island of stark beauty. Formed over a million years ago by a volcano, it has manmade islands on its lakes where thousands of years ago, access was only by a set of submerged stepping stones placed in a mysterious pattern. Rolling hills were covered with ferns and tiny wild flowers, and perfectly planted pine forests seemed to appear out of nowhere. Highland cattle with long horns and shaggy fur grazed near the road seemingly unafraid. 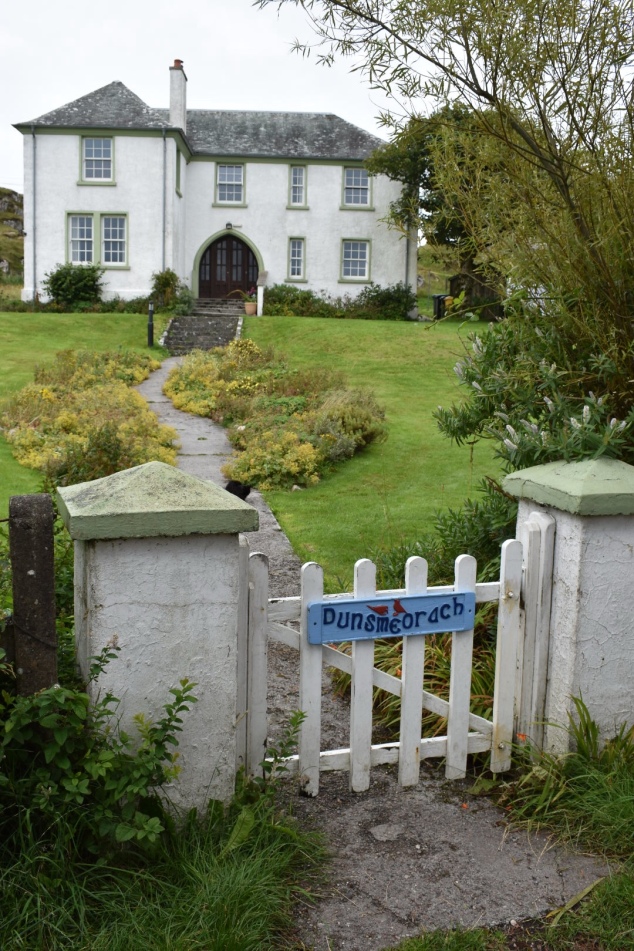 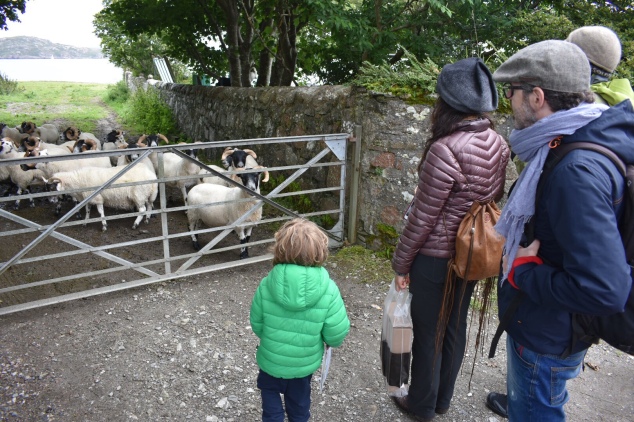 The bus dropped us off at a small port for our final 12 minute ferry crossing to Iona. Iona is a small island off the west coast of Scotland in the Hebrides. It is known as a pilgrimage site for the abbey and as “The cradle of Christianity” in Scotland. St. Columba who was a scholar and soldier founded the monastic community there and it was from there that Christianity was spread throughout Scotland. It is believed that the Book of Kells was written there and later moved to Ireland due to Viking raids. 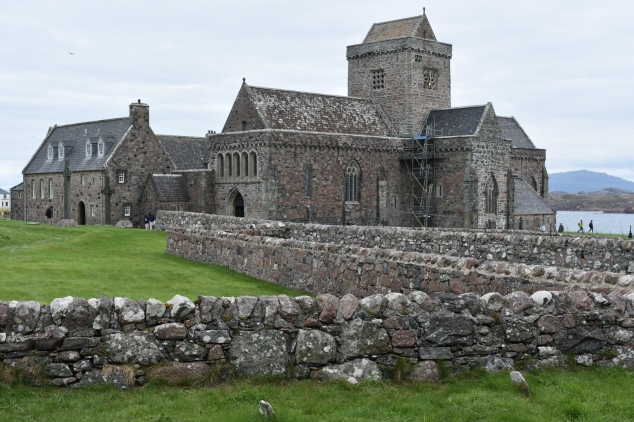 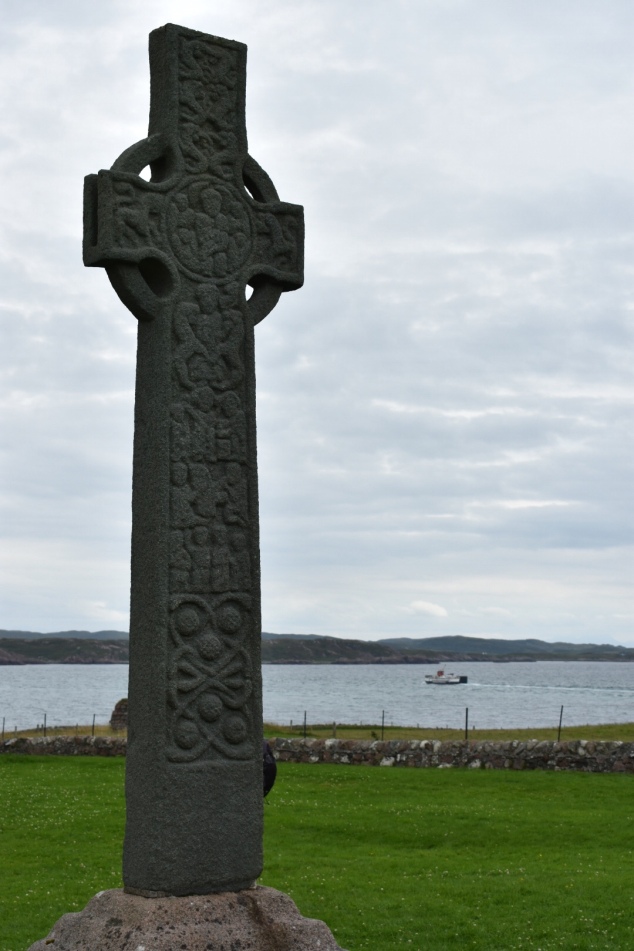 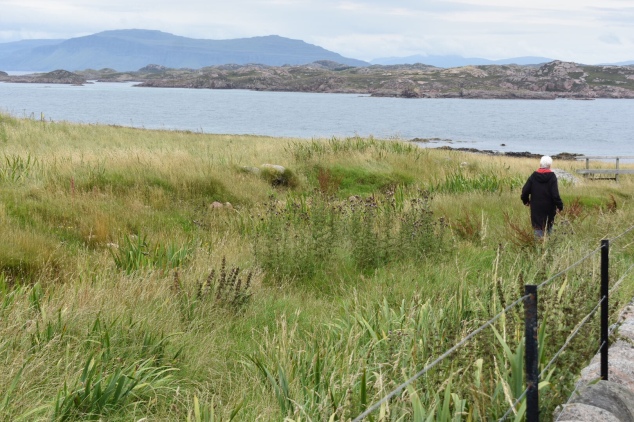 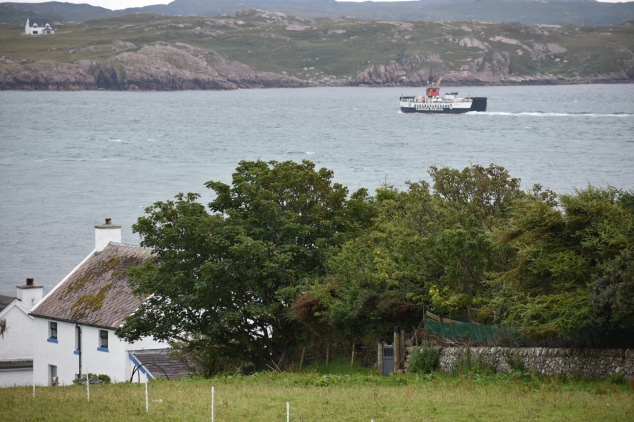 Iona is visited by over 130,000 people every year. It is known for being the center of Gaelic monasticism since the 6th century and is a place of peace and restoration of the spirit. At its ancient abbey, Ancient Celtic crosses from long ago are elaborately decorated with intricate woven designs. At the church there was a small service taking place for a couple to renew their vows.

The town is very tiny but we discovered a wonderful craft shop where all the crafts were made locally such as a knitted sheep needle felted with fibers from local sheep. 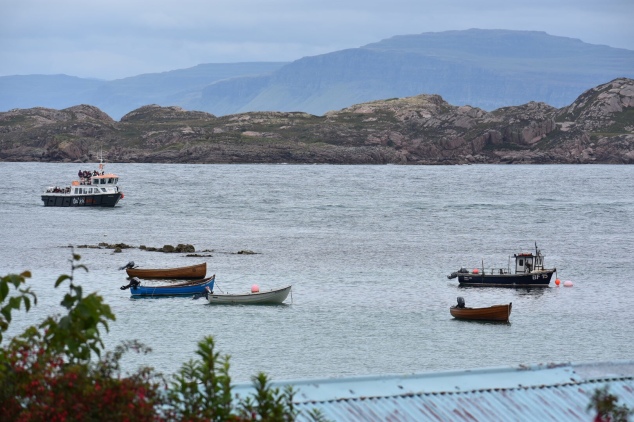 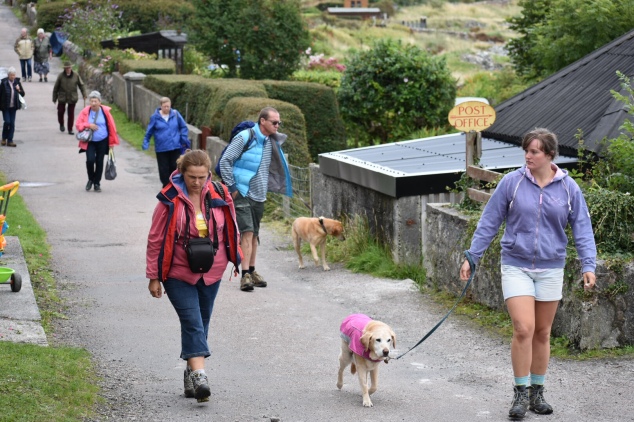 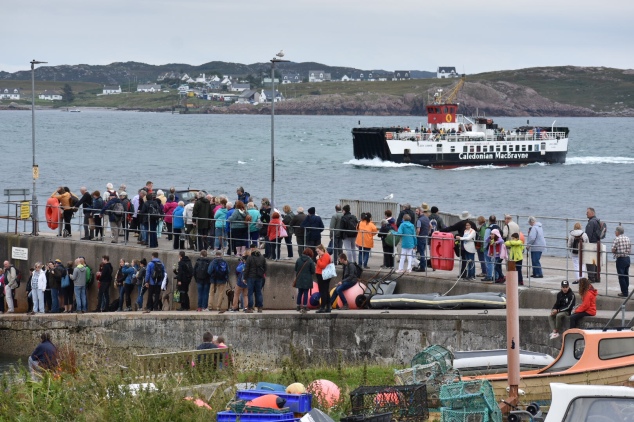 The trip back by bus and boat was very tranquil and everyone seemed to truly enjoy the trip. Dinner tonight was at a seafood restaurant where we dined on fresh scallops and lemon sole. We watched the ferries come in and people fishing even though it had started to rain. Tomorrow will be an early day. We will be flying to London. 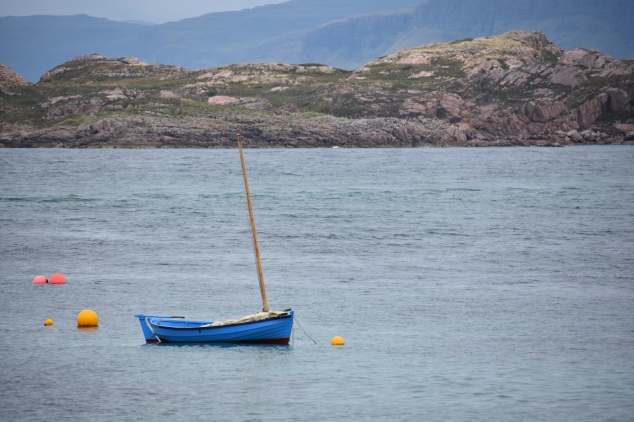 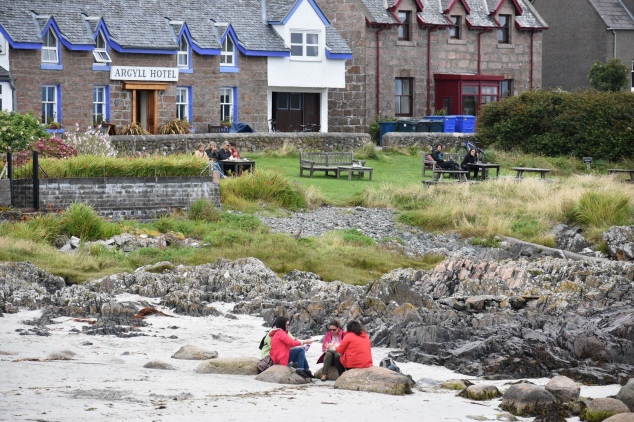 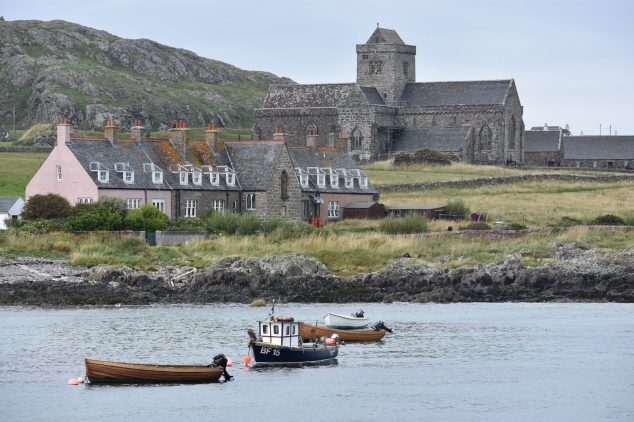 4 thoughts on “A Pilgrimage to Iona”