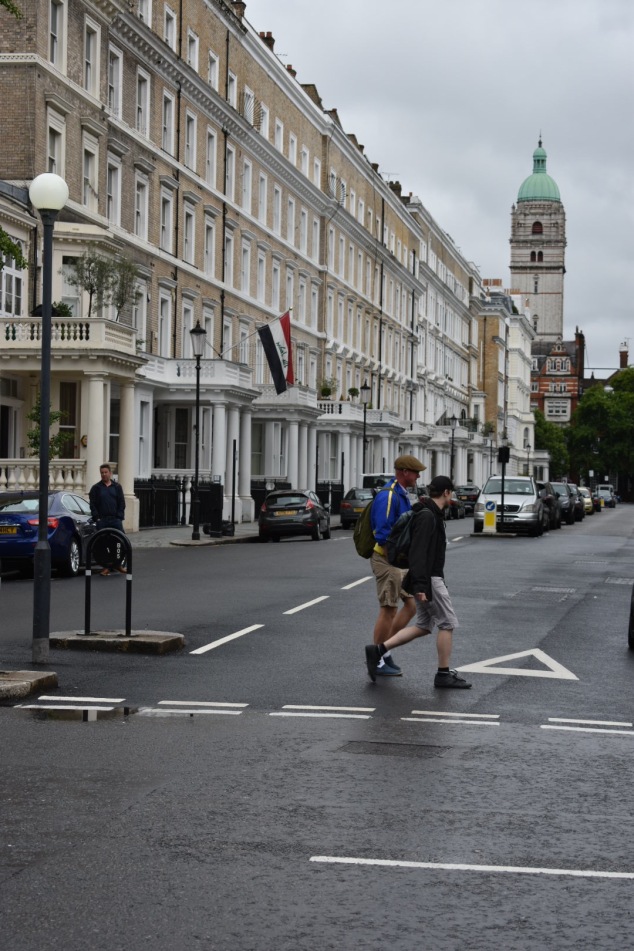 This morning on our drive to the train station in York, the rolling Yorkshire moors seemed almost dark purple. Looking closer, I noticed they are covered with thousands of plum colored wildflowers.

We learned last year that booking a 2-3 hour train to London at the last minute can cost a fortune ($400 in coach for two).  By booking a Virgin train in advance, we were able to get two first class tickets in a quiet coach for a total of $75. Our tickets even included table service with a hot meal. “Mind the gap between the train and the platform,” said the train manager at every stop.

When we arrived at King’s Cross it was raining. We took a taxi across London to our hotel with the most interesting taxi driver. He was a retired private detective who had worked in London. As part of his job he even visited the Oval Office and had a private tour of the West Wing when Clinton was president.

We are staying in the South Kensington section of London. We booked a basic double at our hotel, NH Collection Kensington, and they upgraded us to a suite with two levels connected with a spiral staircase. The neighborhood is beautiful with embassies and white washed houses. Dinner was at Wagamama. It specializes in pan-Asian cuisine. We have eaten at their restaurants in other places in the U.K. and at the one at the Prudential Center in Boston. I love their Asian noodle and rice dishes. We made friends with the waiter who was from Italy and used to live in Milan. He told us stories about himself and drew illustrations to go with them. Most of the time we had no idea what he said, but it was a nice cultural connection.

After dinner we walked around Kensington Palace. Kensington Palace was the home of the Royal Family before Buckingham Palace became the official residence. Queen Victoria was born and raised there, Diana lived there before and after her divorce, and most recently, Kate and William lived there. Prince Harry lives in a cottage behind the palace. Not far from the Palace is an enormous gold statue of Prince Albert. It’s located behind the Royal Albert Hall. It’s over 175 feet tall and was opened in 1872 by Queen Victoria.

Back at the hotel tonight, we are just enjoying the ambience of the hotel and look forward to visiting some museums tomorrow.